Electricians do important work. It’s their responsibility to ensure that electrical systems and products work correctly. They very literally keep the lights on for the vast majority of homes, businesses, and factories.

But you don’t have to just take our word for it. We’ve put together a list of some of the coolest Square D panelboards so you can see what we mean for yourself. Keep reading to learn more.

What is Square D, exactly?

Square D is an electrical equipment brand that’s owned by Schneider Electric. The company is one of the oldest such businesses in the United States, with roots tracing back to 1902.

Square D was originally named the Detroit Fuse and Manufacturing Company. But it changed its name to Square D in 1917 to reflect the trademark “D” that appeared on all of its boxes and switches.

Today, the company’s main focus is on selling circuit breakers for both residential and commercial applications. Square D has four major circuit breaker product lines for electricians to choose from.

The Qwik-Open Miniature is also commonly shortened to just “QO”. It’s the company’s best-known product line and has been used by electricians for many years. The breakers feature a visual trip indicator, which makes it very easy to figure out which breaker in the panel has been tripped.

Sometimes called just “QOB”, this is another highly popular circuit breaker from Square D. These feature screws that are used to secure each breaker to the panel. That makes it much harder to accidentally trip a breaker when you didn’t mean to do so.

HOM Circuit Breakers are much less expensive than many of Square D’s other offerings. This makes them a better offering for people who need to complete electrical work on a budget. However, they don’t feature any visual trip flags or fast-trip features.

Square D’s I-Line Series is especially popular with electricians. That’s because it’s super easy to install these panelboards and breakers. In most cases, you can do so with nothing more than a flat blade screwdriver.

These panelboards also include some pretty helpful safety features. For example, the boards use something called a “stacked bus system”. Essentially, this means that the energized bus is protecting from accidental contact. That makes working with the I-Line Series breakers and boards much easier and safer for electricians. 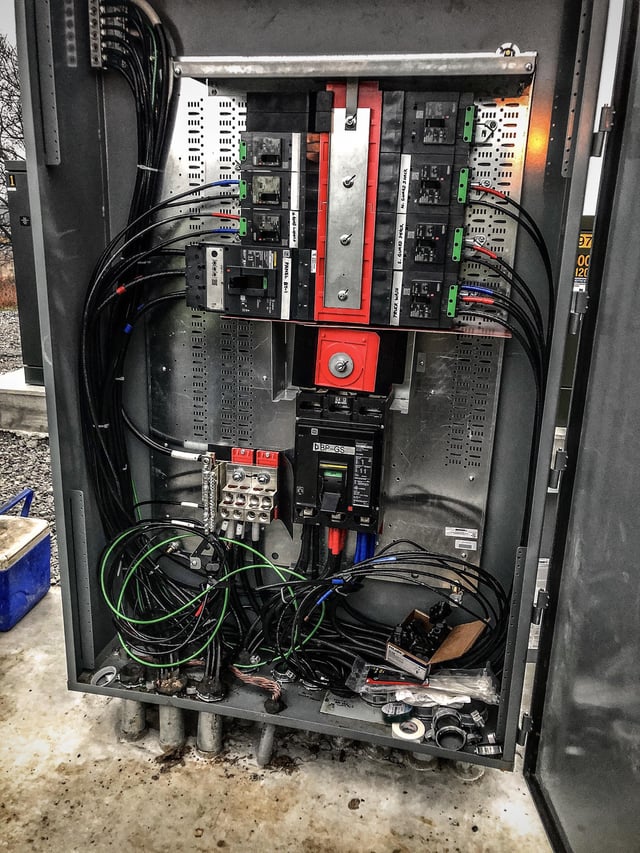 This is one of the coolest Square D panels that we’ve seen. It’s super spacious, which leaves electricians with a ton of room to work. Some of the comments on the Reddit post note how safe the panel is and how easy it would be to work with. It’s a keen example of what makes Square D one of the very best manufacturers of residential and commercial panelboards.

SO MANY TWIN BREAKERS 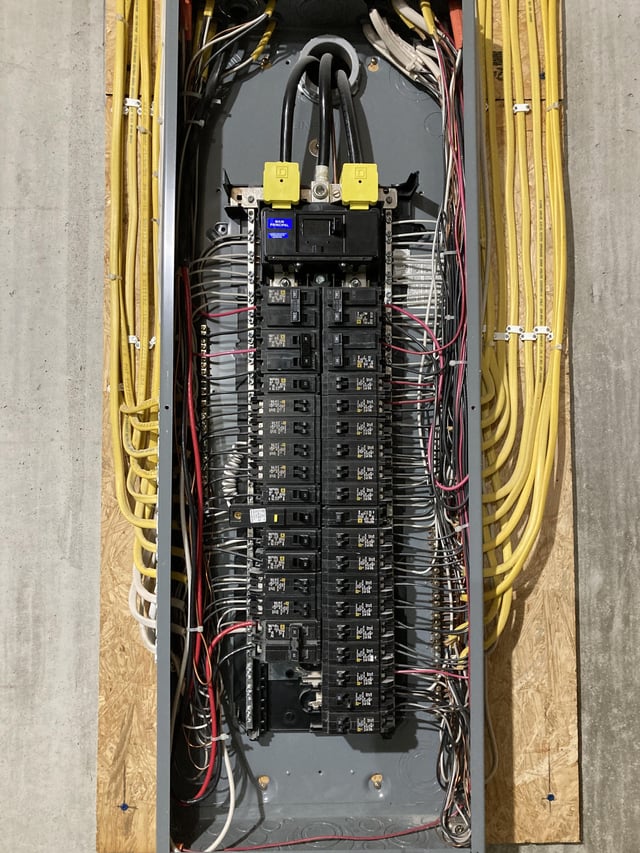 Here’s another crazy Square D panelboard. It’s a 40/80 panel that’s packed with twin breakers. Some of the electricians of Reddit lament the way that the panelboard has been set up. And it does seem like there are a few things out of place or missing in the photos provided. But the large, spacious Square D panelboard still manages to stand out.

THE WORK IN PROGRESS 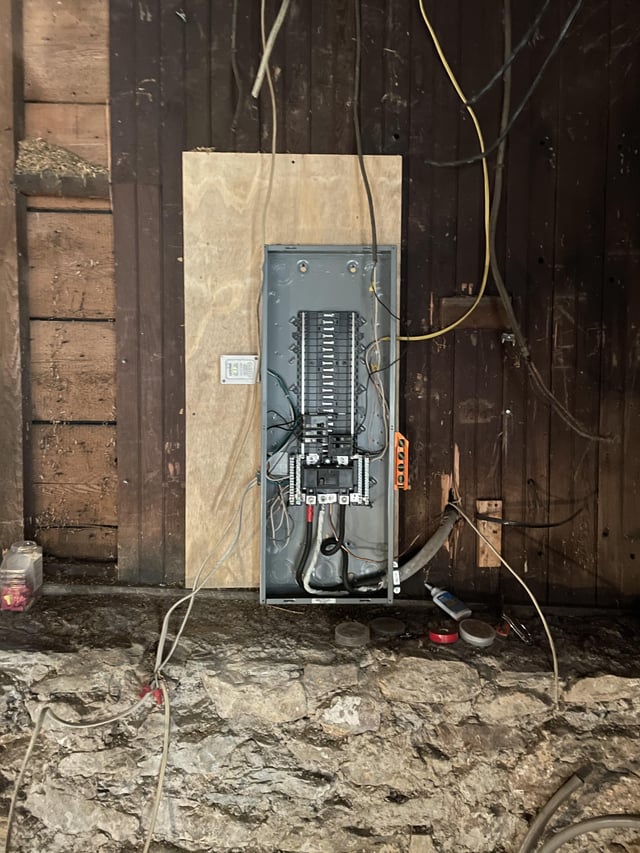 This post shows another angle of what a Square D panelboard can look like. You can see that the board hasn’t been set up yet. But it’s notable for the characteristic Square D features that it displays. The board feels incredibly wide and would leave plenty of room for the electrician that worked on it to do whatever they needed to do. 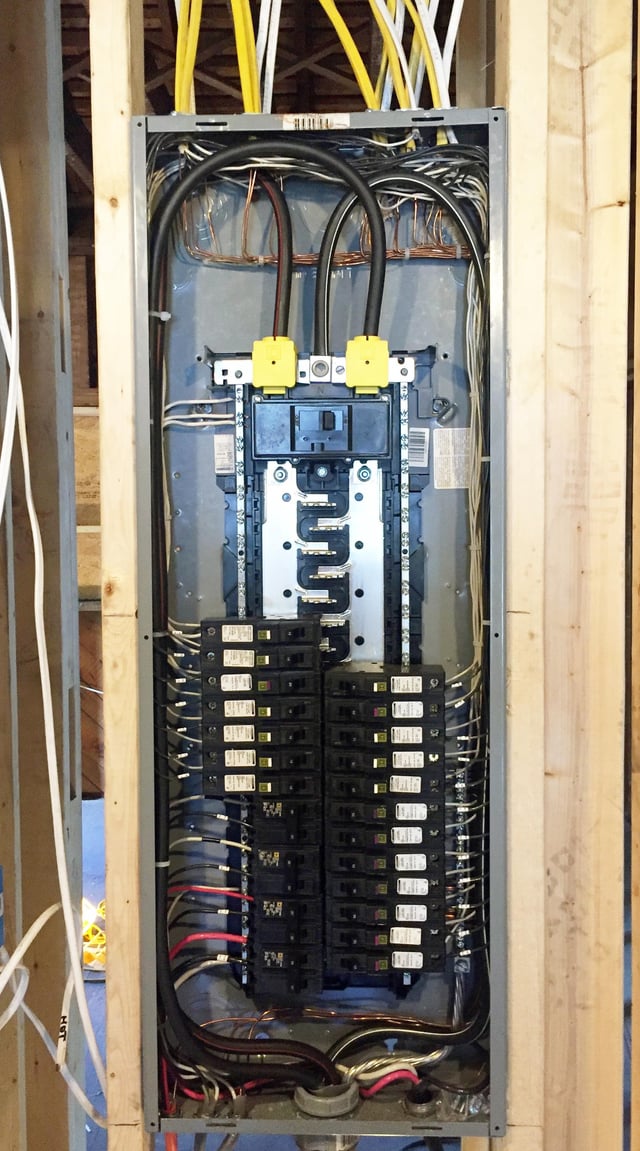 Here’s another great Square D panelboard. This one is one of the company’s Homeline models. You can see that the electrician did a fantastic job at setting up the panel’s breakers and wiring. It should last whoever it belongs to for years to come thanks to Square D’s quality and the electrician’s craftsmanship.

This Square D panelboard is brand new and looks fantastic. It’s a Square D Homeline “Plug-On-Neutral” panel, so there’s no separate ground bar for electricians to worry about. It’s a bit smaller than some of the other panelboards displayed on this list but still seems to have a spacious interior that would make working on the board a dream.

Square D stands out from other manufacturers in their industry in a few different ways. The first is the company’s long-standing history as a solid electrical provider. They’ve developed a well-deserved reputation for simply selling products that work. So electricians tend to look at Square D panelboards favorably from the get-go.

As the images above show, Square D panelboards also tend to be very spacious on their interiors. This makes it much easier for electricians to work with them as compared to many of the other panelboards on the market.

It’s worth mentioning that some of Square D’s panelboards also feature something called a Double-Tapped design. Double-tapping is the process of using one screw or terminal inside of a panel to connect two different conductors. This makes an electrician’s job easier. But only some of Square D’s panelboards are capable of double-tapping, so make sure to verify before attempting the technique.

What if I want to purchase a new Square D panelboard?

The best way to buy a new Square D panelboard is to visit the company’s website. Once there, you’ll find several different Square D boards to choose from. Here’s an overview of each of them.

The Modular Panelboard System is meant to bundle a complete electrical distribution system into a single, integrated system. This Square D product helps people save on both installation time and material costs. Even better, the system features many pre-assembled components so setting it up will be much easier for an electrician to accomplish.

Square D also sells Column Width Panelboards. These are panelboards that are designed to fit W, H, and I-Beam support columns. There are a wide variety of these boards to choose from, including options like the NQ830L2C with its QOB breakers and copper busbar material.

NQ Panelboards are Square D’s other major offering in this space. They feature 240 VAC maximum lighting and appliance circuit protection. Their capacities range from 100-600A and the line includes the option to purchase finger-safe IP2X construction. Features like these demonstrate why Square D continues to stand out among its competition in the panelboard industry.